The simplicity and yet the utter casualness of the place which boasts a 500 year old fort complex, temples and cenotaphs seemed unnatural. Time has stood still in Orchha while everything else has catapult to the 21st century.

I know, it has been long since I penned down my thoughts. A lot of things were preventing me from doing so – laziness being the most important one! 🙂

Legend has it that a Bundela clan chief built Orchha (colloquially known as “hidden”) after their previous capital was overrun. It is conveniently hidden and on a beaten path which is yet to be explored.

We stashed our bags in the rooms, completed the formalities and hastily set out on foot towards the only bridge (dilapidated so to say) connecting the western bank of River Betwa with the eastern front. It was certain that the bridge would be submerged during the monsoons as it was so close to the water level.

Eastern front is home to the Wildlife Sanctuary and can be traversed on foot or on a bicycle (which can be rented). River Rafting is also one of the sports which is on offer. Although, I wonder the technical difficulties of rafting in a river which is full of boulders. 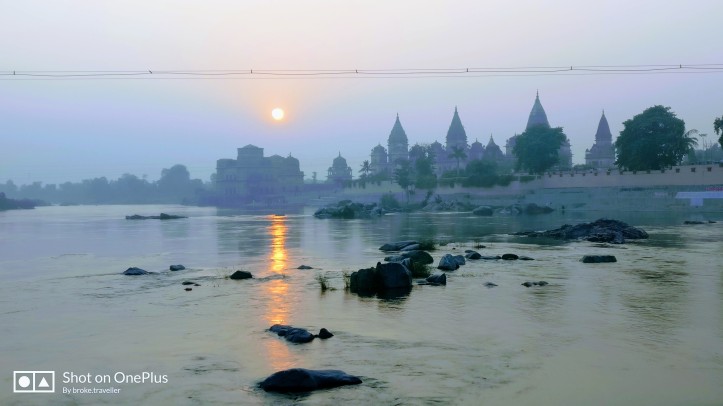 The views of the cenotaphs were riveting and we spent watching the sun set over them from the riverfront while we noticed hordes of local people crossing the river. I stopped a passer by who hurriedly informed me about the 9 day festival to praise Lord Ram. Several politicians were attendees and so were several religious leaders. I made a mental note to stay away from the site of the festival as it had all the ingredients of being a political gathering of sorts.

After having spent most of our evening exploring the town on foot, we retired for the night in our rooms with a cosy bed and a comfortable heater to keep the night chills away.

I was looking forward to the next day and what lay in store for us.

“Please keep your belongings in tow while taking bath.”

“While one of you bathe, see to it that the other person is taking care of your luggage”

This was some strange dream my subconscious was making me see. I was sound asleep, but I could hear this distant mumbling. And for a moment, I thought that the resort staff must have a funny way of reminding people that their belongings were unsafe even in the rooms.

I was jolted back to reality when the next statement included kids and the next one was about the dense fog surrounding the river. This can’t be my brain, I concurred.

People were taking bath on the ghat and the loudspeakers were blaring these instructions to each and everyone in Orchha irrespective of you being asleep or bathing.

Now that we were up, it was decided that we would visit the Fort, Temples and Chattris and then immediately head towards our next destination.

We freshened up and treated ourselves to a sumptuous buffet spread, albeit half asleep.

We braved the chilly morning & the fog to explore the 14 cenotaphs (chattris) commemorating the rulers of Orchha. With the sound of the nearby river gushing, we realized it to be a royal burning pyre which had been converted to a garden complex.

Each chattri had a unique design and no one was same in size. We climbed the top of one of the chattris overlooking the riverfront and spend some time there.

The chattris had an eerie feel to them and being the only ones exploring it so early in the morning, we had ample time to explore each and every part of the complex. The local guide explained their importance and while we noticed a lot of vultures atop the roof of the chattris, a signboard explained that the vultures had their nests in their roofs.

The lanky and distorted frame of the vultures lurking from the top of the chattris reminded us about the heaviness in the air. We thanked the guide and made our way towards the Forts next. 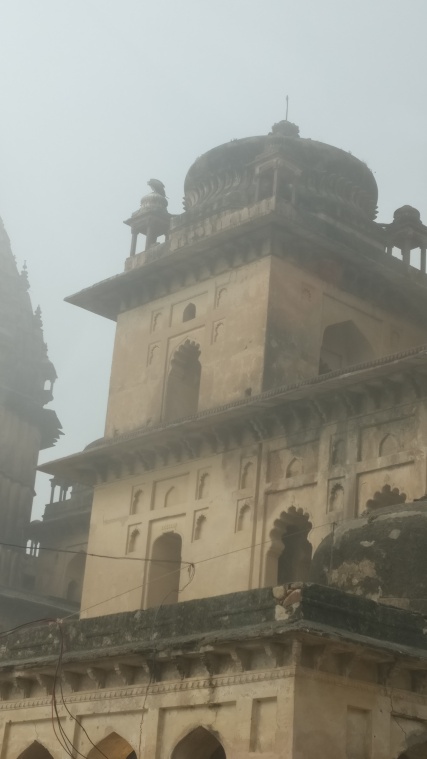 River Betwa splits into many streams in Orchha forming several islands. The fort is built on one such island and is accessible through a causeway connecting it to the mainland.

The Fort is split into 3 major sections: Raja Mahal, Jehangir Mahal and Rai Parveen Mahal. There is a distinctive difference in the architecture of Jehangir Mahal which is said to be built for the Mughal Emperor Jehangir for his visit and follows a Islamic architecture style whereas other Mahals have the contemporary Rajput architecture.

The Fort would have been majestic and would certainly provide ample protection when the river would be in its full flow. One can see that very meticulous planning was involved in its construction with narrow and sudden turns while entering the main complex. The Fort Walls still carry the sheen and color which remind us of its glory years.

The imposing design and towering shikhar of the Chatturbhuj temple signified its importance but strangely it was empty. A local guide approached us and we thought of hiring him so as to learn about the history of this temple and why it was devoid of any idol in the sanctum sanatorium.

While we climbed through the narrow and steep stairs onto the temple top, he informed us that this was originally the temple built to house the idol of Lord Ram, while the present temple was actually a Kitchen House!

According to legends, an auspicious time period (a particular nakshatra) was chosen to place the idol into the Chatturbhuj temple. But since the temple was incomplete at that moment, it was decided to temporarily place the idol in the kitchen house and then move it once it was finished.

The occasion passed but the temple could not be completed in time. Hence, the Kitchen House was converted into the temple, while the majestic Chatturbhuj temple lay in ruins.

The guide also informed us that it is the only temple in the country where Lord Ram is worshiped as a King and not as a God. Temple-hopping was turning out to be quite informative indeed!

We glanced at our watches and realised that it had been 3 hours since our breakfast. Time for some snack.

Sweet shops lining the way to the Lord Ram Temple had just opened up and to our delight had started preparing some fresh samosas.

I was drawn to the smell of fresh samosas. Soon my belly overpowered my brain and I was devouring them! The green chutney with the tang of the tomatoes in them blending with the spicy samosas. I thought that having only one would be a sin. 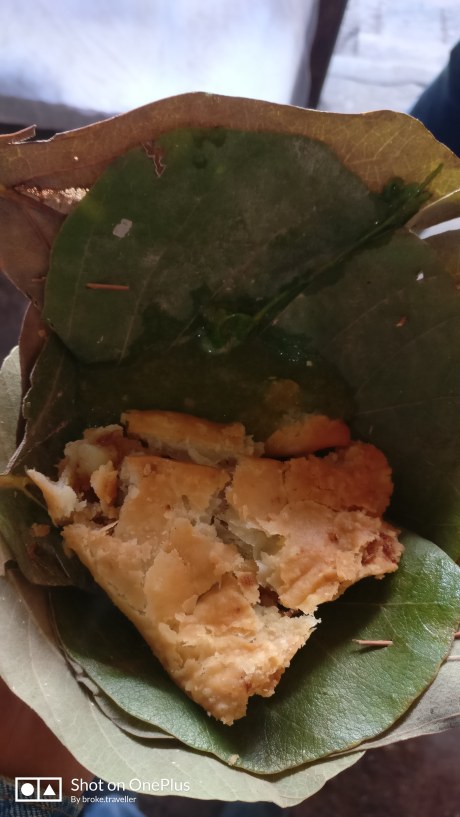 Now that my omnipresent hunger for food was taken care of (for the moment!), it was time to look into other trifle matters at hand. The trip towards Khajuraho.

Charged-up with the information presented to us at the Chatturbhuj temple, we unanimously said that we would skip lunch and head directly towards the Temple complex at Khajuraho.

The journey till Khajuraho was uneventful while the mustard fields lined both sides of the roads for miles.

A 3 hour drive from Orchha, we reached Khajuraho by late afternoon to continue the next leg of our epic road trip.