I am always itching to go on a road trip. So when one of my close friends was visiting from Bangalore, it was imperative that we spend the weekend exploring places around Delhi.

Maps were spread on the table, lamps were lit, compasses were arranged…err, Just kidding! We opened the google maps and searched for a one day adventure spot near Delhi. After much brooding, we zeroed in on Neemrana Fort Resort. It offered us a perfect getaway, which was near and had an adventure sport to offer.

A bit about the place

Neemrana Fort, a 15th century fort, is situated in Alwar district in Rajasthan India. It is around 115 kms from Delhi and has India’s first zip-line on its premises, which was the sole thing on our day’s agenda!

We booked the zip-line online and were allotted a time of 12pm. Since, it would take us 2-3 hrs to reach the destination; we started at around 09am post our sumptuous breakfast at a local dhaba.

After wrestling our way through the typical NH8 traffic jam in Manesar (just after Gurugram, Haryana), we made good time and stopped just for eating guavas on the way. It was a bright and pleasant morning , soon we were parking our vehicle in the Fort parking.

Vintage car rides for the guests (at an extra cost), Camel rides and a visit to the step well are some of the other things one can plan on doing when in Neemrana. But, we were there for flying high.

Once inside the fort premises, we inquired at the help-desk and followed directions to reach the office of the flying fox zip-line. We handed over our belongings and were provided with safety harness along with gloves. A short pep talk followed and soon we started our trek on the hill behind the fort. It was approximately a 10-15 mins trek on loose gravel stones and rocks onto the highest point of the hillock.

There are in all 5 zip-lines which zip you down in a zig zag manner. These lines are between two hills behind the Neemrana fort resort. The fort is nestled between the hills and one has a grand view of the different tiers of the fort while zipping (as they call it!)

Once on the top, we were provided a short demo on how to hook the zip line along with safety instructions on how to operate and stop the zip. We remembered to carry water bottles, though they provide as well. Post the formalities, we geared up to start the first zip.

One of the guides’ used to zip first and the other guide used to hook us up one by one onto the lines and off we went flying from one hill to the other. The view was breath-taking. On the first line, I was so mesmerized by the view that I forgot to position my body so that the momentum would be enough to reach the other side. I was soon dangling on the rope in the middle of the hills with a huge drop. Reality hit hard as I did not know how to roll on the line, if stopped.

The guide waved at me and showed me to turn over and start yanking myself towards him. It looks so easy in movies, but believe me, it required a herculean effort to drag myself and by the end of it, I was cursing for not being in the correct position while zipping.

I decided I would control my excitement to go first and would go when a couple of guys have gone. Lesson learnt. 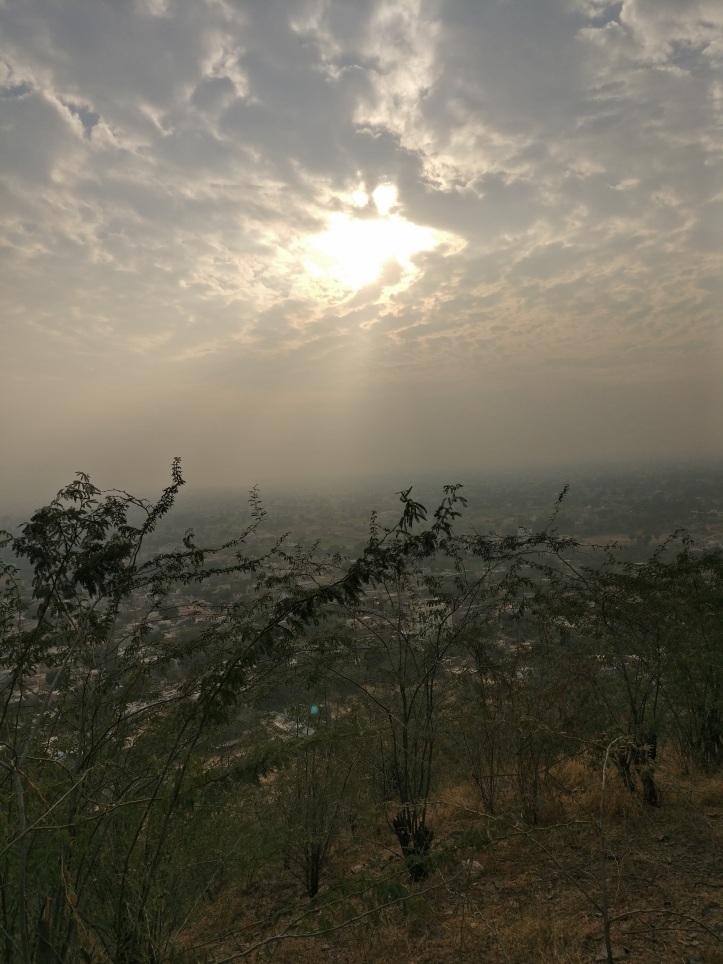 Soon, I became a pro (there are 5 zip-lines after all! *grin*) at zip-lining and thoroughly enjoyed each trip down the hills. (video: click here)

The final zip-line lands you right next to the flying fox office and you end up begging for more. The whole experience took around two hours and we returned the gear while contemplating whether to go again or not. Finally, we decided we need to head back due to other engagements in the evening (read: partying)

We shared a few light moments with the staffs and thought of exploring the fort before heading back for Delhi.  But there was some ceremony in one part of the fort and hence it was closed. The Fort has hanging gardens and swimming pool to offer. An open air amphi-theater of sorts is also available inside.

The fort has a beautiful setting and is a must visit. People were eating food in the local restaurant but we chose to devour on the local cuisine in the dhabas outside. 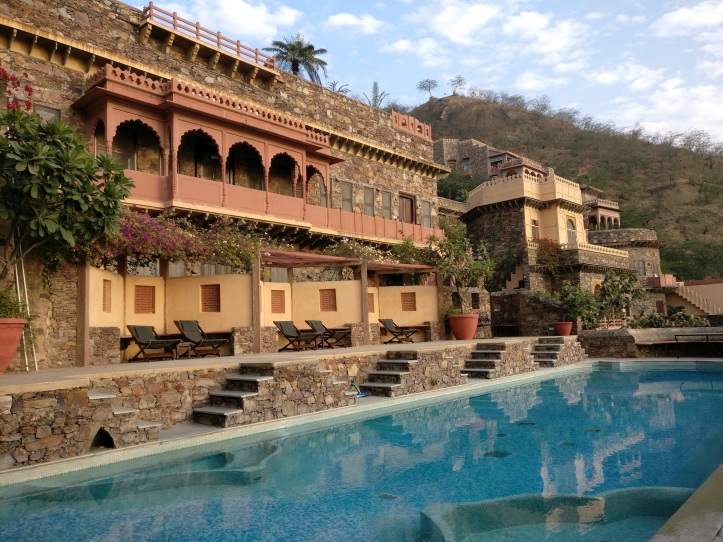 Hence, we took off from the fort premises after loitering around for an hour or so and were back in Gurugram by nightfall.

The decision to go for the zip-line paid back with rich dividends as we had a great story to tell. Although, my friends were pulling my leg throughout the night and for days to come.