Ever since a colleague, Rahul Goel, bought the new Dominar , we were itching to go on a road trip somewhere. We had lined up all the gear but somehow fate was not favoring us, until my late mother suggested that we go to Dharamshala, Himachal Pradesh. 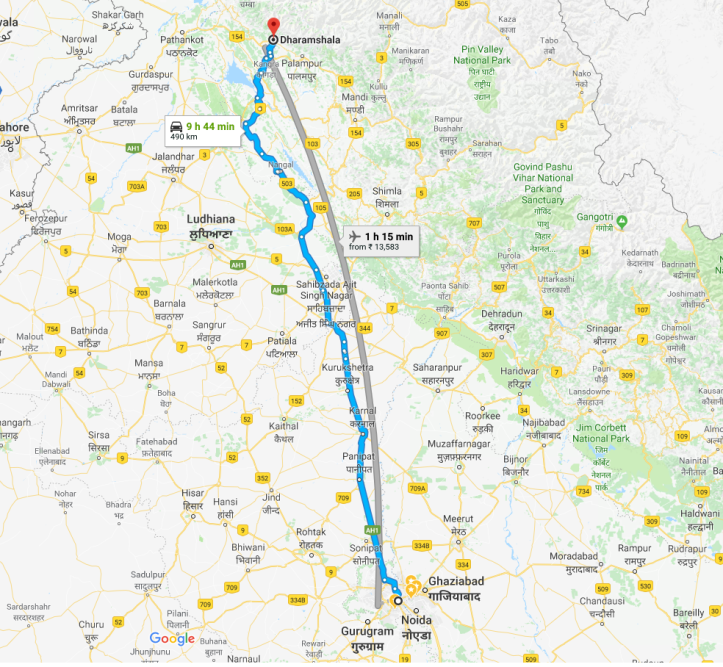 The planning started with the finalization of the route to be taken. The first task was to look it up on maps and see how much travel time are we looking at. Once this was out of the way, it was time to find out from any locals/friends/family as to whether the road is in good condition to drive or are there any diversions etc so as to prepare accordingly for the journey. This was the easy part. The tough part lay in the actual execution.

We had decided that we will leave at 0500 Hrs in the morning to avoid the morning rush and reach approx. post lunch-time to our destination. We did not plan on any mandatory stops along the way. One thing we focused on was that we had a good night’s sleep a day prior to our journey date. 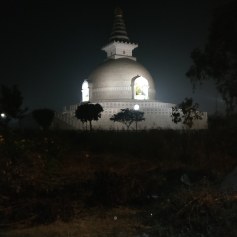 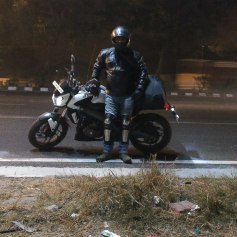 We maintained good speed after exiting Delhi and reached Ambala to bypass Chandigarh on our right at around 0800 hrs. Once on the Ambala highway (NH4), we did a quick chaai-namkeen stop.

The sunrise was a welcome sight for our already frozen bones. It was freezing even with 4 layers on and felt as if we were sitting in a deep freezer. After gulping down the extremely hot chaai in one go to ease the numbness, we started again before the chaai-wala could give his expert comments about the inclement weather.

Before Kiratpur Sahib, there is a forking to the right (towards Manali). We continued straight and changed onto NH-503. The weather was pleasant now and we crossed the lovely fields of Punjab where the mighty canals dissected the lush green fields like arrows, filled to the brim with water. The canals themselves were looking like rivers to say the least.

With the warm sun on our back, we covered enough ground to cross Kiratpur Sahib, Anandpur Sahib before our stomachs started making the strangest of noises unheard of till then. It was time to satiate the hunger growing in our bellies. At around 10, we halted for some refreshments and ended up having rajma & tandoori stuffed parathas @ Nasib Dhaba. Not to over-eat and feel light headed later, I somehow stopped my belly from controlling my mind and we started again towards our journey.

We crossed the town of Nangal situated in the foothills of the Shivalik range and the Nangal Dam on the mighty Sutlej. The Dam is built on the downstream of the Bhakra Dam. Since the roads were silky smooth, we covered the distance till Amb (Una district, Himachal Pradesh) in a jiffy. At Amb, we took right to start the climb towards Kangra, Himachal Pradesh. We took a small break of 5 minutes to straighten our backs and rode non-stop to cross Ranital-Kangra and reach Dharamshala at around 1400 hrs.

Since we had already booked our stay at Zostel Mcleod, we punched the location into the GPS only to realize that the ascent from Dharamshala to Mcleodganj is not one to be taken lightly. With a single road climbing steeply and blind turnings all along the way we reached Mcleodganj with a view to cherish. (There is another road which passes via the district collector’s residence and an easier route) 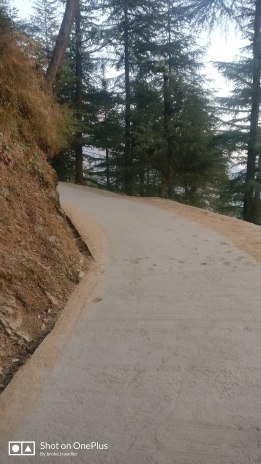 At the main chowk in Mcleodganj, we started asking locals about Zostel but not many were aware of it. Some shopkeepers showed us the way and after calling Zostel reception  quite a few times and a lot of detours/wrong turns later, we finally reached Zostel Mcleod after an hour at 1500hrs.

We checked in and thought of relaxing for some time before exploring the town of Mcleodganj below us. Soon the sun set and we headed out to eat our dinner at the Mcllo Restaurant. We planned to keep our motorcycles at Zostel and hike, as none of us had the energy to ride back again at night to Dharamkot.

We enjoyed a sumptuous meal and while returning we picked up some home made pastries from Woeser Bakery . The hike back did not tire us (maybe due to the pastries), especially me, as I was eagerly waiting for what lay in store for us on the next day. 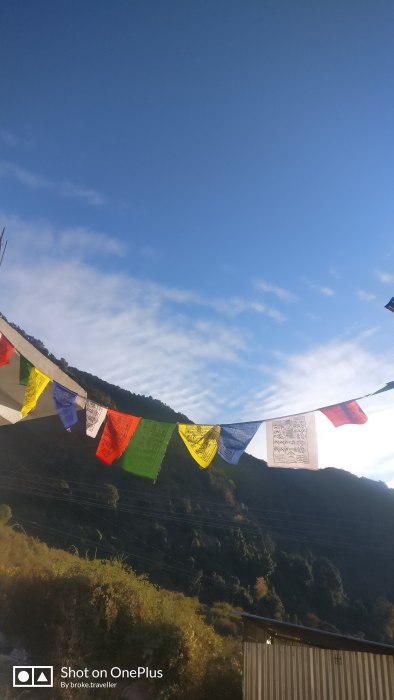 Prior to booking the Zostel, I had extensively searched for things to do in and around Mcleodganj and #1 on the list was Triund Hill Trek. So to bring things to their logical conclusion.. off we went for the trek! 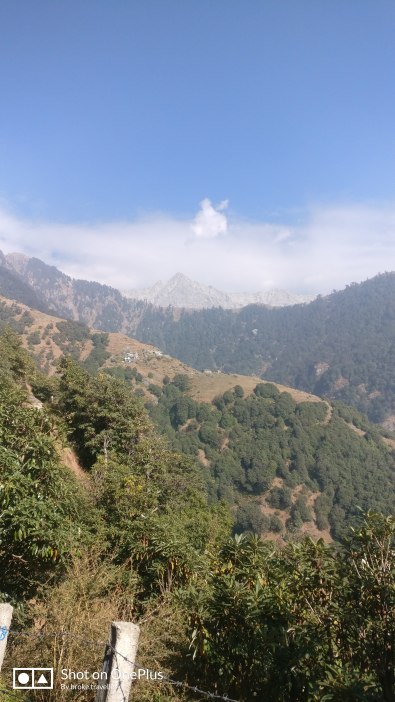 With our over-enthusiastic (more on that later) guide, Panda, we started our trek after having delectable mushroom cheese toasts which we washed down with a glass of orange juice. The Salvation Cafe in Zostel serves lip-smacking food from across the globe. Specially their chocolate chip cookies (Loved them!)

The ascent from Zostel till Triund was marked with broken trails, incomplete steps to stones to steep climbs. It took us around 4 hours to reach Triund top and the view was breathtaking. 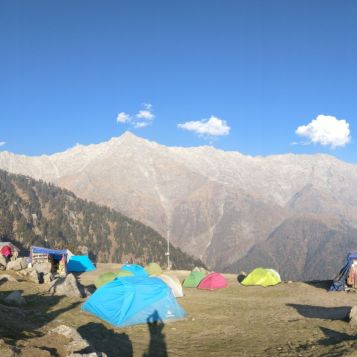 Once at Triund, we planned on having some hot maggi (staple food in the mountains) and rested for a while before ascending towards Snowline Cafe which is further up through the dense forest over the mountains.

We saw the sun dancing on the peaks in front of us while setting. It was a mesmerizing view and the landscape looked to be from a fairy-tale story. The different hues of the sunlight glowing brightly before dying out gave me the impression of a candle glowing brightly right before it dies out. Change is the only permanence, I thought.

As it was a full moon, there was an abundance of moonlight so it was not difficult to maneuver over the hill. The trail from Triund to Snowline is marked by yellow arrows on the stones and its hard to miss them.

BUT our guide had other plans. Thinking that the trek was not that adventurous he made us climb a mountain in the last stretches of the trek… IN THE DARK! Which I will not deny was exhilarating. It was a steep climb which was nerve-wracking in the beginning due to the sheer precipice. Once on top, we were swerving around the edge of the face. Respite came when we could see the lights of Cafe Snowline (the only cafe at that height) in the distance. We reached and lit up a bonfire. Dinner was rice-lentils (Dal Chawal) served hot. Looking back at our adrenaline pumping climb in dark over the mountain and sharing other stories we enjoyed the bright moonlight up top and the eerie silence of the forest below us. Soon, the exhaustion took over and we snuggled into our respective sleeping bags. The night was chilly with the temperature dipping to a teeth chattering -2°C. 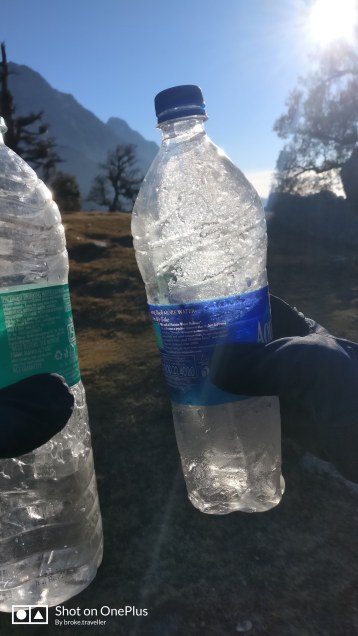 The next morning we woke up early to catch a glimpse of the first rays of sun peeking over the mighty Dhauladhar range. It was a sight to behold. I was deeply engrossed in thinking about life when we were brought back to reality by our cook, Manu, who with his ever jovial attitude, served us some exceptional cheese omlette. The frozen water bottles were testimony to the wrath of nature at night and their unforgiveness to the ignorant. It portrayed a very important yet usually underestimated aspect of never taking anything or anyone for granted. Being ever respectful and humble is what I took back with me from the snowline.

The climb down was uneventful with regular stops along the way. The morning sun falling on our cheeks giving us warmth and yet soothing at the same time. Suddenly, an easier way down the mountain “magically” appeared in front of us. We all looked at our (read: over-enthusiastic) guide who gave us a sheepish grin to hide from our piercing gaze. We all had a good laugh throughout the way. It was at lunch time that we reached back to Zostel and immediately went our ways to freshen up. 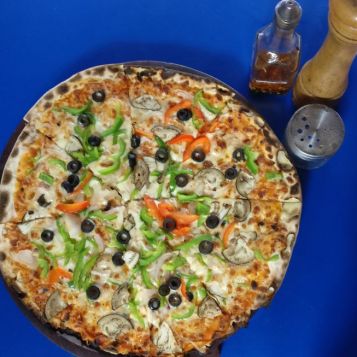 As the way down took away most of our energy we went to devour some fresh wood baked pizza and pasta from Morgan’s Place and came back with the tiredness kicking in. The evening was spent bonding and sharing stories of the day and beyond. We crashed and immediately slept so as to start the next day early for our return leg.

Although we were supposed to start early but Rahul was unable to find his bandana. Surprisingly, we found the bandana kept untouched near the reception area where he might have left while checking in. He was delighted and promised to give me anything for locating it. (Lol!!)

We started at 0800 hrs and breezed past Kangra, Ranital and made a customary chaai-namkeen stop near Amb at around 1000 hrs. We saw a sweet-shop preparing some fresh boondi (an Indian sweet) and soon the stop turned into a snack break. 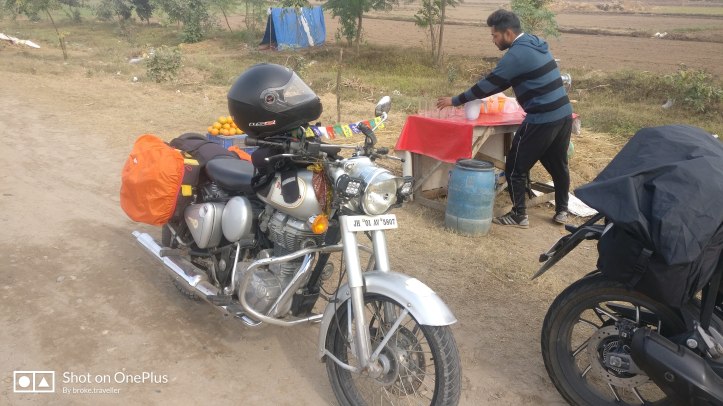 After having the heavy snack break, we continued on our journey. Once we passed Kiratpur Sahib and were approaching Chandigarh, we saw a lot of roadside vendors selling fresh kinnoo juice. Most riders forget to take frequent breaks and re-hydrate themselves which often leads to cramps and exhaustion. The liquid gave us the necessary minerals and boy, was it tasty!!

We started again and decided to stop only for gas to make up for lost time. Our respective motorcycles needed re-fueling near Ambala and luckily we spotted a gas station tied next to a dhaba. The dhaba was devoid of any customers but the smell emanating from the kitchen was reason enough for us to concur that the lunch was going to be a gastronomical delight. And it was not a disappointment to say the least!

Note : We had our respective motorcycles serviced beforehand and all the required documentation with us before we started for the trip. We were riding with a proper full face helmet and knee caps and riding jackets, gloves etc. to keep us safe and happy.